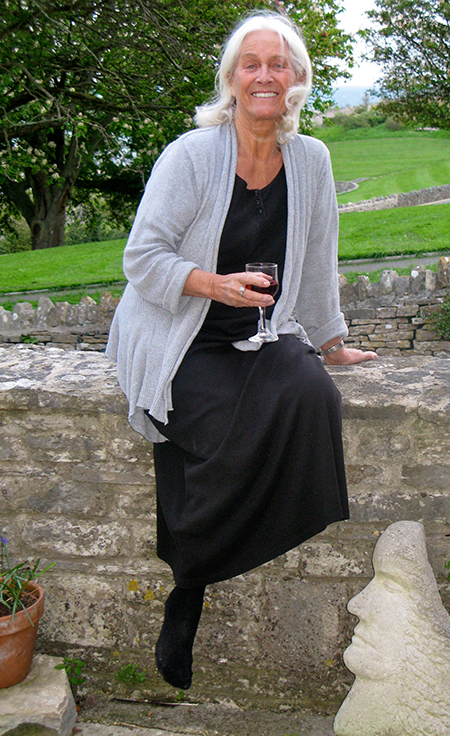 ... and get Keyne Island for free.

Pat Garwood was born in 1941 in Paignton, Devon, England.  In 1947 the family moved to Southwest London, and she attended The Art’s Educational School in Marble Arch, her heart set on becoming a ballet dancer.

However, during her first term there, aged nine, she was given a small part in the Ealing classic film The Lavender Hill Mob and the die was cast.  Although she continued her dance training, she realised that acting was the profession for her and went on to play parts as a child actress in the West End theatre, and on television and radio.

At 16, she studied at R.A.D.A. (The Royal Academy of Dramatic Art) in London, and when she graduated she went straight into the West End playing Wendy in Peter Pan at the Scala Theatre.

It was there that she met her husband, award-winning playwright Jeremy Paul.  They met after the show and it was love at first sight! They were happily married for 50 years, until his death in 2011. She has four daughters, Amanda, Tara, Sasha, and Sophie, and ten grandchildren.

During the years of bringing up the children Pat carved out a successful television career as an actress.  As a writer, Jeremy worked from home, which made it easy for them to dove-tail their work commitments. The family lived in Richmond Surrey, and it was there that she and Jeremy became founder members of the celebrated Orange Tree Theatre. Pat appeared in many television series and plays and as the children all left home she felt free to take on more work in the theatre, touring nationally.

In her forties she began to get the urge to write and completed two novels, Keyne Island and Walnuts.  However, these had to go on hold when she was offered a starring role in the popular television series No Place Like Home.

Pat retired from acting in 1999, and she and Jeremy settled in Dorset to live by the sea.

In 2006, she embarked on a project with her daughter Tara Randall. Our Way – a mother and daughter’s weight loss diary, was published by Discovery Books, in 2007 – (Available to buy here)

In the last few years Pat has returned to the stage to appear in several plays for Dramatic Productions at the Lighthouse Theatre Poole, playing Madame Arcarti in Blithe Spirit and Lady Bracknell in The Importance of being Earnest.

In 2014, she decided it was time to get back to her writing, kept on hold for so many years.  As she re-read and re-worked  Keyne Island, she realized how much she loved the writing process. The novel was published  by her daughter Amanda Atkins, and is available to buy or download from Lulu.com, Amazon and most online retailers.

Inspired by the positive feedback to Keyne Island, Pat found herself re-visiting Walnuts and felt compelled to re-work it. Being set in the present day, the re-working really became re-writing. Although the main characters and story-lines remained, the technological progress and social changes since 1981 made for a completely new version. Walnuts  was published in November 2015 and is available to buy from Lulu.com, and all major online retailers.

After the publication of Walnuts, and its warm reception from readers, Pat began writing her third novel Best Way Out, set in a euthanasia clinic in the UK in 2030. Best Way Out tackles the topical and controversial subject of the right to die, imagining a Britain where assisted suicide is a legal right for anyone over seventy-five, if they feel their life has run its course. It is a celebration of life: of age and experience; of racial and sexual diversity – offering us a vision of a ‘good’ death. Published in November 2016, Best Way Out challenges us all to look at things a little differently.

Most recently, in 2017, Pat was struck with an idea for a psychological thriller; one of her favourite genres to read. Through a Crack in the Door hit the page, and as with all her novels, she gets right under the skin of all the characters, young and old, victims and criminals alike. The story begins with five-year-old George witnessing a terrible crime ‘through a crack in the door’ in his own house. What follows is a cocktail of suspense and surprises;  family loyalty and betrayal; and some tender moments of new beginnings springing from the most tragic of losses.

Through a Crack in the Door was published in early 2019, shortly before her death.

In April 2018 she was told that she had Non-Hodgkin’s lymphoma, (coincidentally the malady she gave to her character Dr Alan Fordyke in Best Way Out).  At 78 she decided her last few years were not to be filled with hospital appointments, fear, and the misery of inflicted treatment; instead she instantly knew that this was precious time, that she wanted to fill with family, joy, fun, holidays, normality and most importantly love. She was symptom free for 10 months, and even at the end suffered no pain.

She had very strong feelings about “the best way out” long before her diagnosis. Unable in this country to take the best way out, she had the next best thing, which was to die in her own bed, in her own bedroom, surrounded by family, sunshine and flowers – with the support of a fantastic palliative care team and a wonderful GP, who respected her choices.

She was a force of nature, and she will be greatly missed by all who knew her.